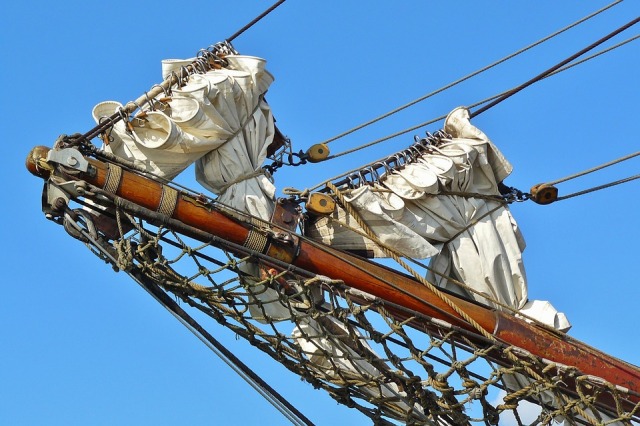 The colonial powers were not officially at war, yet. But the dying had already begun in 1753. France and England wanted the same lands and control of the sea lanes. England was slow to match the French head start to dominate the New World and sometimes it was left to circumstance to decide the day. In the warm waters of the islands, a simple merchant run to the salt pans for trade casts our crew into a deadly mix they cannot avoid. From the recently released CAPTAIN’S CROSS:

“Swing the nines aft!” Ben shouted. He could hear musket and pistol fire coming from the two bigger ships locked in deadly combat. Ben heard Wills banging hard below and knew they were holed. He hoped the carpenter could work his magic and save them. He glanced the other way and judged the distance to the beach. He would run her up into the shallows if he had to, but that would mean a deadly pounding if he did. It seemed to take a long time for the French sloop to gain on them but the heavy water in Annabelle’s belly cut her speed and on they came.

“Ready on the nines!” Bear shouted. The rails were pulled and both guns were pointed aft. Ben looked at the French sloop that was now well within range. The French sloop had no bow chaser or they would have fired by now. Musket fire was filling the air with buzzing shot and the thunk of balls striking wood and canvas. The Frenchman would soon overtake them and rake them if they got close abeam. Ben waited a minute more letting the Frenchie close the gap. He slewed the stern and Bear lined up and fired. The shot went right down the side of the pursuing sloop but missed. Ben swung back the other way as Bear moved his crew across and fired the other nine. He had loaded it with double shot and both hit hard into the Frenchman.

Reloading began and Ben tried to will it faster as they were still being overtaken. The warship carried more men than Ben did. The sloop was larger and wider than Annabelle and had bigger sails. Even crippled, the Frenchman had the real advantage now that water was rushing into Annabelle.

Musket balls began to strike all around the quarterdeck. The French could not turn to bring their broadside around so they were trying to kill him. As the deadly lead balls buzzed past, he could not help himself from trying to duck out of the way. The nine pounder went off again, causing Ben to jump just as the French sloop’s bowsprit knifed into the aft rail behind him with a loud crunch. The shot broke the Frenchman’s mast and dropped the mainsail and heavy rigging onto the enemy crew but it was too late. A French sailor leaped to the quarterdeck behind Ben and before Ben could react, Draco had him down with blood gushing from the artery in his neck.

The wheel did not need his hand any longer and he stepped to the swivel gun on the starboard rail and fired it aft into a group coming across the bowsprit. He felt his men coming around and past him and the other swivel fired. He could see more of the French crew coming forward over the writhing bodies and lost count. They were in for a terrible fight.