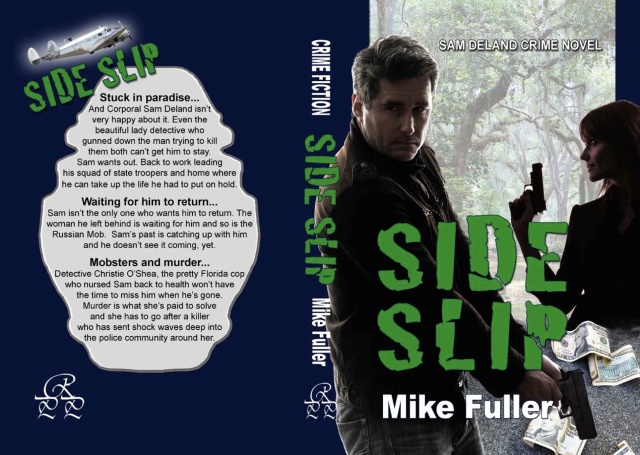 Very happy to announce the release of my fourth novel, the third in the crime/detective series, SIDE SLIP. What began as an adventure in bringing the past into the present featuring new characters and some from the previous stories, became a labor of respect and honor.  The work is fiction but is based in real events. Those of us who were there know just how real it was. This nook is dedicated to good and life long friends who were.

Stuck in paradise and he isn’t very happy about it. Even the beautiful lady detective that gunned down the man trying to kill them both can’t get him to stay. Corporal Sam Deland wants out. Back to work leading his squad of state troopers and home where he can take up the life he had to put on hold. But Sam isn’t the only one wanting him to return. The woman he left behind is waiting for him and so is the Russian Mob.  Sam’s past is catching up with him and he doesn’t see it coming, yet. Detective Christie O’Shea, the pretty Florida cop that nursed Sam back to health won’t have the time to miss him when he’s gone. Murder is what she is paid to solve and she has to go after a killer that has sent shock waves deep into the police community around her. A triple play of heart stopping and heart warming suspense, action and life as Sam, his troopers and Christie all find they are in the middle of murders and mobsters. A story that twists and turns through the investigations and the lives of characters you will grow to know, to cheer and to fear. Sharp dialogue, real characters and enough drama, humor and mystery to keep the reader up late not ready to put it down, yet. Another thrilling Sam Deland crime novel from the author of SINK RATE and ROPE BREAK.

13 thoughts on “SIDE SLIP RELEASE”

Diary of a Bookseller

An online place for notes and random thoughts. No essays, no reviews, just first-draft impressions.

we love all waggy tails