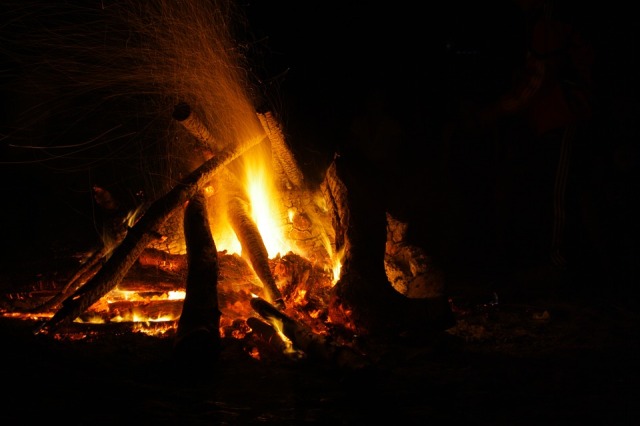 The rules were a bit different. Though enemies met and fought in this war, there were exceptions. Exceptions that profited from the theft of human cargo. Ransom, if the cargo lived long enough.

De La Rue wondered if the buckskin clad man walking into the camp was the Indian woman’s husband. He was old enough to be the father of the White boy, but the Indian was obviously too young to be the mother of the child on her back and the blonde boy, too. And he did not look to be of mixed blood. That was a good thing. More value to be ransomed back to the English. Let the savages have the small woman.

Bear Track slipped sideways and passed words to the Huron next to him and then it would pass to the others. They would wait until the food was in the bellies of the people in the camp and their senses dulled.

The two Ottawa were sent to capture the woodcutter. Bear Track was not sure this was the best decision, but he did not want them with him when they went against the camp. The Ottawa were young and lacked wisdom. He did not trust them.

Bear Track eased back to the Frenchman and waited. The yellow haired boy and the man in buckskins were eating now and the Mohawk was cleaning the child. Bear Track saw it was a boy and knew the worth of these captives was greater now. A valuable addition to any Huron family, the boy would find a new mother and a new home north of the lake. And Bear Track’s cousin would have a woman who would make him another boy.

Hummingbird froze over the water keg, the handle in her fingers spouting water onto the ground. She turned to look into the hard face of a Huron warrior as he reached out and took her by the neck. Joshua heard Paul let out a sharp chirp of surprise beside him and opened his sleepy eyes to the muzzle of a French musket only an inch from his face. He snapped a hand to the barrel and twisted, but the face of the Indian holding the weapon dissolved into a mist and darkness took him away.

Paul tried to get up, but was lifted to his feet from behind by a White man wearing a woodsman’s shirt and holding a pistol. There seemed to be Indians swirling around him and he was sure he was about to die. And without a fight.

The Ottawa hesitated just a few feet from the big, shirtless White youth hacking away at a downed log with a heavy axe. The Indian was not afraid, but lacked the experience to decide quickly how to overcome the larger man. The Ottawa’s cousin was behind him and offered no help. A hesitant step resulted in the snap of a small dry twig underfoot and before the Ottawa could take another step, the White youth turned with the axe toward the two Indians.

The second Ottawa was a year older and moved around the first as the axe swung at them both. The older Ottawa ducked under the blow and brought a club through a short arc and caught the White man in the bare rib cage. The air went from the White man’s lungs and he staggered forward. The Indian club came around again and caught the woodcutter’s head with a thud.

The younger Ottawa stood over the body gasping, though he’d done nothing. The older Ottawa dropped the club and drew his knife. The hostage looked dead and was of no use to them now, but his hair would go back to Canada with them instead.

As Jedadiah’s body was rolled onto his back, the older Ottawa grasp his thick hair and was ready to cut the scalp away when they both heard, “No!”

Obie stood just feet away looking at the two Indians hovering over his brother’s bloody head. The older Ottawa looked up into the face of a dead man standing above him. He looked back down at the face under his hand full of hair. The hair slipped from his grasp and he stood facing the walking spirit, not knowing what to do. His cousin was struck silent as well and both seemed to tremble at the sight of the shirtless, axe wielding ghost.