MORE THAN JUST A DOG 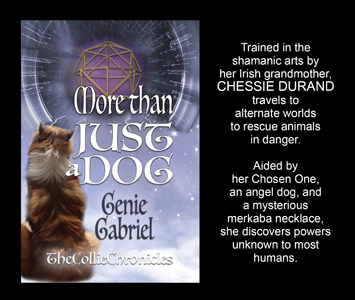 So very happy to be part of the kickoff blog tour for fellow Rogue Phoenix Press author Genie Gabriel’s new book, MORE THAN JUST A DOG. Besides being an accomplished author, Genie is also one of the best cover artists around. Please join me in congratulating Genie on her latest book. As a bonus,Genie will give away a digital copy of More Than Just a Dog to one randomly drawn commenter at each stop.

Title: More Than Just a Dog

Buy at: Amazon, Barnes and Noble

Three generations of independent women, driven in different directions by one man’s anger. Until his death reconnects them with their mystical Irish ancestors and wonders beyond this limited human existence

Trained in the shamanic arts by her Irish grandmother, Chessie Durand travels to alternate worlds to rescue animals in danger. Aided by her Chosen One, an angel dog and a mysterious merkaba necklace, she discovers powers unknown to most humans.

Ever practical, her mother provides a sanctuary for these alien and exotic species stall-beside-stall with barnyard creatures. And when their paradise is threatened by ignorance and poachers and unknown dangers beyond the stargates, Marlise loads her shotgun and joins the fight.

With only a fleeting second thought, Peter entered the coordinates in the computer implanted in his wrist to transport to the cave on Chessie’s farm. His mentor had warned him of disturbances in the stargate that caused several “incidents” and had resulted in the decision to seal it off. However, Peter hoped opening the surface entrance had corrected those disturbances.

This was the most direct route to see Chessie and, after weeks of waiting, he wanted more than to just court her in dreams. He wanted to touch her. Smell the scent of flowers in her hair. Convince her they could build a relationship in the real world.

But which real world? His dimension or hers? Or perhaps somewhere totally different.

One step at a time, Peter reminded himself. After his abrupt departure the last time he had seen her, Chessie might not exactly fall eagerly into his arms. Best he establish a cover story before he contacted her. Thanks to a disagreement between the ruling governments of his dimension, he had some time off between assignments of retrieving endangered species during which he could pursue his Chosen One.

He stepped through the stargate in his dimension, anticipating the look of pleasure on Chessie’s face when she saw him.

”Danger. Danger. Coordinates cannot be guaranteed.” His computer implant transmitted the message to Peter’s brain as his body was sucked into a spinning vortex, faster and faster, buffeted on all sides by angry voices and recriminations until he blacked out.

The rock formations fascinated Chessie as she descended into the cave. However, the hot springs drew her most strongly. She loved to slip into the heated water and feel all her tensions wash away, as she was doing today. She thought about posting a notice at the entrance of the cave informing her family of her private hours in the hot springs so she could soak in the nude. But so far, she limited herself to wearing a modest one-piece bathing suit while in the springs.

Her body floated slightly as she closed her eyes and leaned her head back on a rubber pillow she brought with her. “Ahhh…”

She wondered if Peter would enjoy the hot springs as much as she did. Where was he? Were her dreams of Peter and the cave simply her overactive imagination?

Intuitively, she knew more than fantasies were involved. She hoped by returning to the cave, she could solve this mystery.

With her eyes closed, her mind and body relaxed even more. The water rippled against her skin, soothing and calming. A small wave splashed against her chin and Chessie shifted her body. Opening her eyes, she noticed tiny, choppy waves across the pool’s surface that hadn’t been active when she first stepped into the pool.

Sitting up straight now, she touched the merkaba around her neck and wondered if some of its magic was at work.

Get out of the pool. Chap’s image appeared in her mind.

She didn’t need to be told twice. She shoved her feet back in her tennis shoes and pulled the terry cloth robe around her body.

Frozen with fascination, she stared toward the rock wall where the cave ended—that her grandmother insisted wasn’t the same as when the cave had been closed up.

The rock wall was now splitting apart like giant elevator doors, revealing the dark night sky filled with billions of stars and a spinning vortex that grew larger and larger as it moved toward her.

Use the merkaba, Chap stated. Do not give in to fear. Simply know the merkaba will protect you.

Chessie braced her feet at shoulder width apart and placed a hand over the merkaba. Protect all that is pure. Surround us with love and keep us safe.

She didn’t know where the words came from, but Chessie repeated them over and over as the vortex engulfed her, echoing with her grandfather’s angry voice. “You will never practice your witch’s spells again! You will be obedient! You will do as I tell you!”

Images of her grandfather as he had been when alive swirled within the vortex. Chessie held fast to the merkaba and called upon the spirit of her grandfather. Help us! By all that is loving and pure, keep us safe!

As Chessie repeated these words, a body fell at her feet as the vortex faded and drifted away like mist dispersing under the morning sun.

Fur against my face and the soft smell of a dog curled protectively around me existed before my first memories of this life. So began my journey of being more in tune with animals than with people.

I went through the expected motions of marriage, kids, divorce, and career, but usually out of step with most of the human population. This proved to be an advantage in developing an independence and a curiosity about things most people don’t even consider.

A minor health issue led to energy healing and becoming a master level Reiki practitioner. Working at the local animal shelter flipped on the switch to communicating with animals. Each dog I adopted showed miraculous changes most people couldn’t believe.

As a writer, I explored the mysteries of why people behave as they do, and also became fascinated by science, especially quantum physics. But perhaps my favorite way of writing stories is to ask the question, “What if?” and dive into those imagined worlds—surrounded by my beloved furbabies, of course.

7 thoughts on “MORE THAN JUST A DOG”

Just one Dyslexic Woman and lots of Books to talk about

An avid reader from Dorset with a passion for books, particularly Crime Fiction. Tweets as @HelpImHannah. All written content is original and not to be reproduced without prior permission.