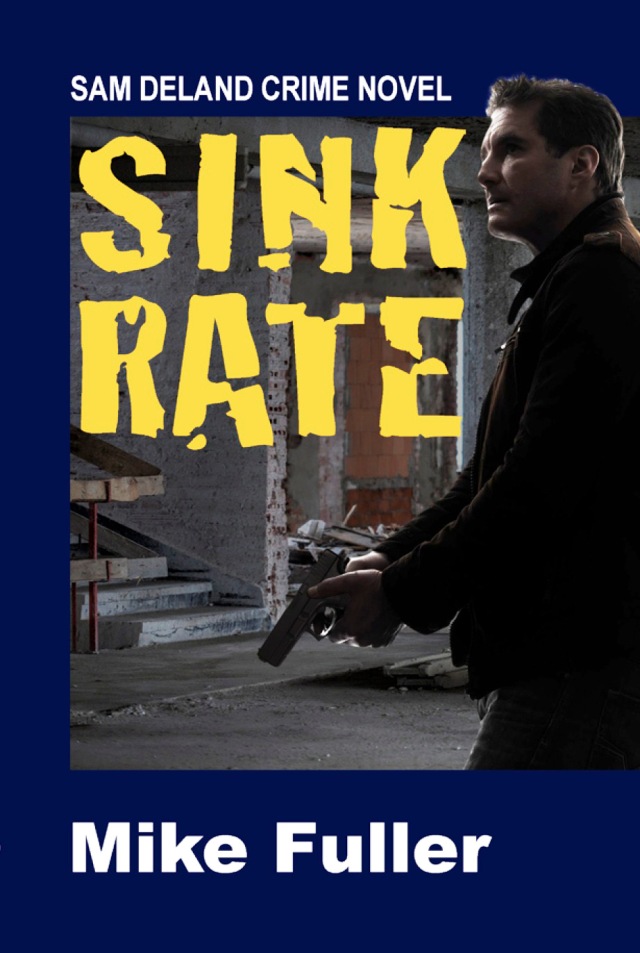 With the fourth Sam Deland Crime Novel, GROUND EFFECT, soon to be released and Christmas present time approaching, it seemed a very good opportunity to plug the books that every good crime fiction addict must have in preparation. Each of the novels: SINK RATE, ROPE BREAK (still my favorite work), SIDE SLIP, and GROUND EFFECT should stand alone but it is much more fun to get to know the characters and the lay of the land from the start.

Our hero, Sam, seems to have it all together. It is a sham. He knows his business but there is darkness in his past and hurdles to leap in his present. Then there’s Ozzie and Calvin and Johnnie.

From the first in the series, SINK RATE:

Sam fell asleep on the carpet. Johnny went outside and smoked with the guard. The night slowly moved along, cold and wet. Sam dreamed about flying. When he was all wound up about something, he dreamt about flying. It didn’t help. He was in control when he really flew. These dreams were like the ones kids have about not knowing the combination on their school locker, or showing up at a party with no clothes on. Out of control dreams.

Sam was in the 1-26 toying with cloud base in a boomer of a thermal. Up and up, strong solid lift pushing him up into the misty fog. He punched out and flew ahead. The ground was a mass of rocks and mountains. Even from altitude, Sam could see that landing out was impossible. But the thermals were so good. He felt he could go forever. One tiny field, miles ahead. Too far? He checked his altitude and watched the airspeed. If he held it just right, figured it out, even if he got no other lift, he could make the field. If he didn’t, he would crash into the mountains. He flew on, knowing he would feel the glider bump and pull him into a thermal and take him back up. Nothing. He kept going lower. The field seemed to be just as far away. He couldn’t make the sailplane fly closer to it and he kept going down. Got to be a good thermal here, look at that cloud, got to be here. Where’s the field? Rocks getting closer. Can’t make this mistake, can’t do dumb things like this. Misjudge the sink rate and miss the safe field. The rocks coming up to the glider. How could this happen…

“Sam, wake up. I got some coffee for you. Sam…,” Johnny shook him slightly. “Calvin wants to see you, he’s awake.”

The lieutenant was gone and only two uniformed troopers were in the waiting area. Sam didn’t recognize them and then realized that the shift changed at midnight. “Give me a minute,” he said to Johnny and went into the men’s room to wash up and rinse the carpet dust out of his mouth.

He looked awful. The mirror didn’t tell him any lies. The bruise on his cheek was darkening and the cuts were crusted over and swollen. Hot water to wash everything out and then cold to wake himself up. It was getting light outside. He thought about Molly. She would be fine as long as the temperature stayed up. Ozzie fed her last night and Sam expected to be home today, at least to get fresh clothes and come back. He rinsed his mouth with the hottest water he could stand and rubbed his teeth with his finger. Time to start on the second guy. Who the heck is it? Yancey might never tell them. Got to get Yancey or the driver, Harold. Squeeze the second shooter, the 9mm, out of them.

“Sam, you okay in there?” Johnny stuck his head in and saw Sam staring into the mirror. “Ozzie called, he’s got Don and Frank Dugan over at Belmont hashing out the affidavit on Yancey. Be ready to fax up to the DA in less than an hour. Just waiting for the ballistics. Ozzie says it’s still pretty circumstantial. He’s leaving some of the more, shall we say, speculative parts out. Fill them in by trial he hopes. BPR’s gonna want a statement from me, too. Gotta go over this morning sometime. I just love those guys.”

“Stick to the incident, don’t go into the investigation. They don’t need to know the whole thing. They give you any trouble, ask for a break and get me,” Sam knew some of the BPR investigators. Most were okay, some were real pricks. He didn’t want them slopping up his case.

Calvin was smiling at Momma’s joke. He couldn’t laugh, it hurt too much, but he could sure smile. Sam waved at Calvin through the door and held up a finger to let Calvin know he would be just a minute. He found the nurse in charge and made sure she understood to take the uniformed troopers to the room with Calvin when he came out of recovery. The television crews would be letting everyone know about last night with the morning news and Sam figured Yancey might be upset that an eyewitness to his mayhem was still alive.

“You sure have unusual methods of evidence collection, Calvin,” Sam said and leaned over the bed. “Supposed to use a water filled barrel to retrieve the bullets, not you. Had us very worried last night. Doc says you won’t be dancing in the clubs for a while, but you’re going to be fine.”

“Johnny did the job last night. Saved me from the other side. I tried to go, but it wasn’t my time. I had to come back to catch them. Couldn’t leave without finishing the case,” Calvin had to slow down and breathe. Only one lung was working right. “Any word on Yancey?”

“No, not yet. He’ll turn up. Don got a piece of him last night. We got some leads on Yancey’s running partners, a big guy named Harold and two Arabs, no names on them yet. We figure one of them is probably the inspection mechanic. Maybe he’s the second gun, too.”

“Yeah, need a break on the second gun. We got Yancey’s now. Guarantee it,” Calvin smiled and closed his eyes.

“They gave him something for the pain,” Momma said. “He’ll sleep now. I’m going to call home and let them know.”

Sam sat with the sleeping Calvin for a while in the quiet room. He was out of things to do and didn’t know where to look next. Philadelphia was a big city and Yancey could be anyplace, even dead.