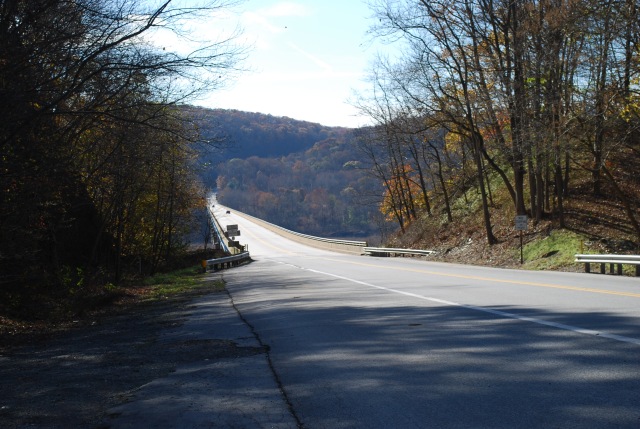 I have to confess. Heights scare the crap outta me. This bridge over the Susquehanna River west of Lancaster is terrifying for those of us who get dizzy on the second rung of a step ladder. It’s 175 feet above a rock strewn river bed with little in the way of sides to contain a vehicle. So I just had to use it in my latest crime novel, GROUND EFFECT.

Returning are two characters from the previous SAM DELAND CRIME NOVEL series thrillers, Calvin and Tim. Two plainclothes troopers chasing down a desperate and armed killer. And the bridge is right there in front of them.

He kept his speed up and began making decisions. The cops had been too fast for him and he’d only hit one of them. Now they knew who he was. He had seventeen dollars in his pocket and only a few rounds of ammo for his rifle. The only thing he could think of to do was to put as many state lines between him and the PA cops that he could. The rifle would buy him anything else he needed.

He went through the curves a little too fast and watched his rearview mirror. Only an SUV and a ways back. Ahead on the straightaway he looked forward at the fast approaching black buggy and the orange triangle bolted to the back of it. He didn’t need more complications at the moment and swerved around, clipping the side of the buggy with his outside mirror. Close but no cigar.

“Yow!” Tim exclaimed as the truck brushed the Amish buggy and continued on. The horse did a double side step but fell back into its steady trot.

Calvin let off a bit. “He’s slowed down. Maybe he hasn’t figured out who we are yet.”

The bridge. It was only a few miles ahead. Once across he could turn south and be in Maryland within minutes. And West Virginia not too long after that. A plan to turn west into the Appalachians began to swim through Steven’s troubled head. The bridge.

“The bridge. Try to block the bridge and hem him in.” It was the Troop J crime sergeant taking charge on the radio. But there was only one marked car on the west bank of the Susquehanna. Others were coming in from York but were still a ways out. “Make it happen,” the sergeant ordered.

The level road began to lose altitude and the sweeping curve almost took the Ranger from view. Calvin goosed the gas and began to close up on their murderer. No marked unit was close behind them. The closest one was stopped at the opposite end of the bridge.

Steven dropped his speed as he cleared the trees and came down the last of the incline to the bridge. He was onto it before the vehicles at the far end registered in his brain. The two big trucks seemed to be parked in both lanes. He’d seen no construction signs and did not understand what he was looking at. Until he was a quarter of the way across.

Tim got the .223 out and charged. Calvin slowed as he got near the end of the bridge and let the pick-up go ahead. They watched as the truck neared the halfway point and the brake lights came on.

“Now we’ll see what our shooter is going to do. If he comes back, shoot the truck then him. I ain’t gonna chase him anymore.” Calvin stopped just short of the bridge and waited.

The trooper at the other end drew his .45 and waited too.

“Shit!” Calvin popped his seat belt and started out of the car. Tim turned to see a minivan approaching from behind. Calvin stood up and pulled his badge case out and held up the gold badge.

The minivan pulled up behind and stopped. Calvin yelled, “Police operation. Turn around and go back.”

The driver’s door opened and a middle-aged man in shorts and a t-shirt started to get out. Calvin took two steps toward him and shouted, “Get back in your car and go!”

That seemed to work.

“Calvin, he’s moving.” Tim shouted as the pick-up accelerated toward the roadblock. They could plainly see the rifle come out of the driver side window held in the shooter’s left hand and fire at the lone trooper at the other end. The rifle went back inside but came back out again and the pick-up driver fired another shot.

Calvin jumped back in and put the gas pedal to the floor. “We’re gonna stop him before any more people die.”

Tim watched the meager sides of the bridge pass by and had the horrible thought that it wouldn’t take much for a car to flip over the side and take a mighty plunge.

“Just get me a little closer.” Tim popped his seat belt and began to lower his window.